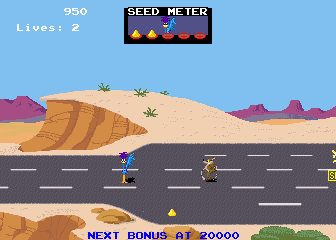 Road Runner is a variant of the platformer genre, based on the Wile E. Coyote and Road Runner shorts. It was developed and released by Atari Games in 1985. Gameplay The player controls Road Runner, who is chased by Wile E. Coyote. In order to escape, Road Runner runs endlessly to the left. While avoiding the coyote, the player must pick up bird seeds on the street, avoid obstacles like cars, and get through mazes. Sometimes Wile E. Coyote will just run after the Road Runner, but he occasionally uses tools like rockets, roller skates, and pogo-sticks.

The Road Runner can earn points for eating the birdseed and also by making Wile E. get hit by trucks, falling rocks, etc.

The Atari 2600 version has a difference from the other versions, in that the Road Runner isn't required to eat the birdseed but can do so for the points.